Today we’re featuring a guest post from our friends at Retronyms. They’ve built some amazing community features into their app Tabletop using the SoundCloud API and have open sourced their CloudSeeder Devkit. This post was written for us by David Shu. David is a software engineer at the Retronyms and has worked on a number of iOS apps, including Tabletop and Dokobots. He currently resides in San Francisco, CA.

We recently built a SoundCloud-powered community into our app Tabletop, a modular audio environment for the iPad, using the CocoaSoundCloudAPI. The project, CloudSeeder, lets users browse, stream, favorite, and comment on Tabletop tracks without ever leaving the app.

As developers, we discovered tons of talented users in our Tabletop community. At the same time, our users found inspiration from each other and a new showcase for their creations. To share in the excitement of community creation with all developers, today we’re releasing the CloudSeeder Devkit as open source on Google Code. 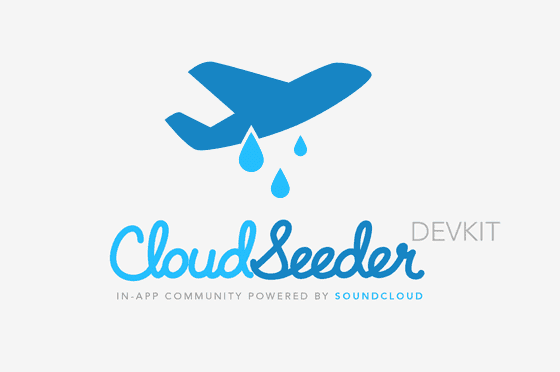 Let’s run through a typical scenario using Tabletop as an example. When you start up an app with CloudSeeder integrated, you’ll get an at-a-glance view of the latest community happenings including app news, latest track posted, and likes and comments on tracks you’ve uploaded. When someone makes a cool new track, everyone who launches the app gets notified immediately in their feed. 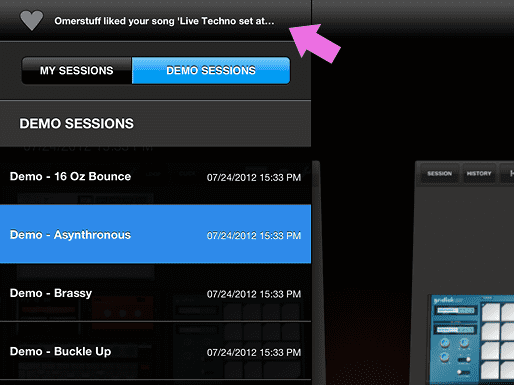 Tabletop displaying the Headline view in the upper left hand corner. All the headline items are cycled through with a nice animation and you can size this view to suit your UI.

Tapping on the Headline will bring you to the CloudSeeder community. The Main view will slide up, showing you News, Featured Tracks, Popular Tracks, Latest Tracks, My Uploads, My Activity, and Following. CloudSeeder filters all the tracks for you (using the "created_with" property, for those of you familiar with the SoundCloud API), so all the tracks and activities you see will be specific to your application. 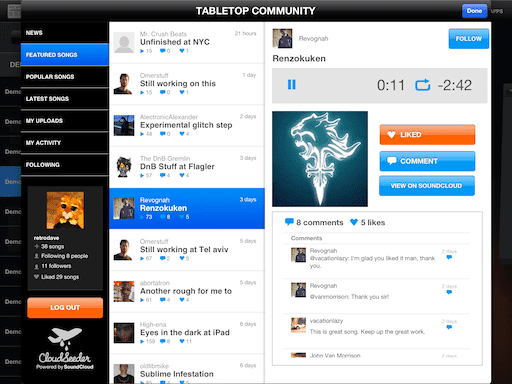 Curating Featured Tracks can be done in the app. When you point CloudSeeder to a SoundCloud user in the config file, all you have to do is “like” a track as that user and it automatically shows up in the Featured Tracks list! If you’re a user, nothing feels better than when the app creator features your track!

Integrating CloudSeeder into your app

If you’re ready to poke around CloudSeeder, you can head to the Google Code project. We had fast integration and easy customization in mind when developing CloudSeeder, so the repo contains source code and images for UI (including Retina!) that you can just drop into Xcode. You should be ready to go after adding CocoaSoundCloudAPI, filling out the config header file with a few SoundCloud details, and adding the CloudSeeder resources to your project.

We also added a couple new features to the upload process. If you register for the upload notification, you can add tags, description, and BPM to the track metadata. For example:

Be a part of CloudSeeder Select

CloudSeeder has one more trick up its sleeve to benefit developers: cross promotion. Apps that are a part of CloudSeeder Select get featured across all other CloudSeeder Select apps. When users check out their Featured Tracks list, one track out of that list will be a featured track from another fellow CloudSeeder app. Tapping on that track will show the usual track view, along with a section promoting that app. 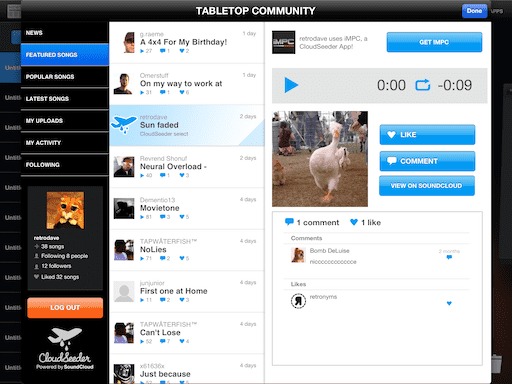 CloudSeeder Select: Cross promote your app to users in other CloudSeeder apps! A banner on top of the Track view shows the cross promoted app’s details.

A simple email with an icon image and some information on your app will get you in and ready for cross promotion. Find out the details in the documentation.

So if you’re the proud developer of an iPad audio app, get the devkit from the Google Code project, see CloudSeeder in action with Tabletop, and check out the CloudSeeder SoundCloud group. Thanks!