When we rebuilt our iOS app, the player was the core focus. The interactive waveform was at the center of the design. It was important both that the player be fast and look good.

We iterated on the waveform view until it was as responsive as possible. The initial implementation focused on replicating the design, which heavily used CoreGraphics. A single custom view calculates the current bar offset based on its time property. It then draws each of the waveform samples that are in the current visible section of the waveform. Each sample is either rendered as a filled rectangle for unplayed samples, or by adding clip paths to the context then drawing a linear CGGradient for the played samples.

To handle progress updates, we used the callback block on AVPlayer:

This generates 60 callbacks per second to try and achieve the highest possible frame rate. This solution worked perfectly during testing on the simulator. Unfortunately, testing on an iPhone 4 did not produce similar results: 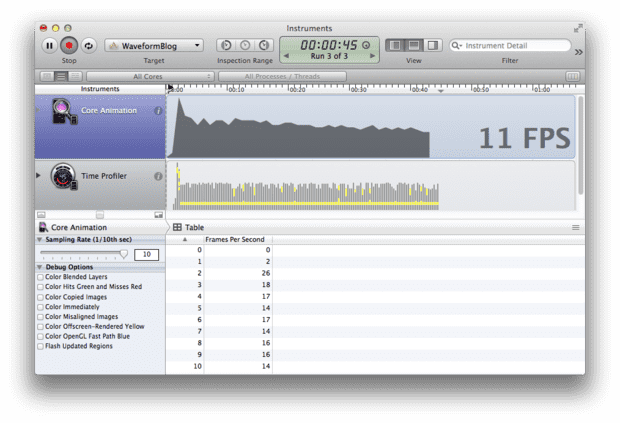 The preceding trace displays an initial frame rate of 17 FPS that drops to 10 FPS over time. As time progresses, there are more played waveform samples, which are expensive gradient fills and take more CPU time than unplayed samples. The CPU profiler displays that 90% of CPU time is spent in the drawRect: method of our waveform view.

We needed a new approach that did not require redrawing the entire waveform 60 times a second. The waveform samples never need to change in size, but only in tint color. This makes it possible to render the waveform once, and apply it as an alpha mask to a layer filled with a gradient on the left half, and white on the right half. 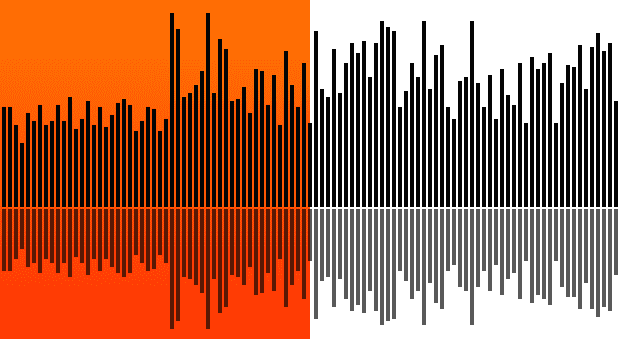 We can now stop using the AVPlayer timer callback for waveform progress and use a standard UIView animation instead:

This drops CPU usage down to approximately 0%, without noticeably increasing the GPU usage. This would seem to be an obvious win, unfortunately it introduces some visual glitches. Watching the animation on longer tracks shows an amplitude phasing effect on the waveform samples.

We need a way to tell CoreAnimation to only move the mask to pixel-aligned positions. This is possible by using a keyframe animation that is set to discrete calculation mode, which does not interpolate between each keyframe.

A high-level API was added for keyframe animations in iOS7, but the CoreAnimation interface in this case is a bit clearer:

Adding this animation to the mask layer produces the same animation, but only at pixel-aligned positions. This has a performance benefit; animating longer tracks produces animations with the FPS reduced to the maximum possible FPS for the number of animation keyframes, which reduces the device utilization accordingly. In this case, the distance of waveform animation is 680 pixels. If the played track is 10 minutes long, the FPS is 680 animation pixels over 600 seconds ≈ 1 pixel position per second. CoreAnimation schedules the animation frames intelligently, so that we only get a 1 FPS animation with correspondingly reduced 1% device utilization.

The CPU performance is at an acceptable level, but 50% GPU usage is still high. Most of this is due to the high cost of masking, which requires a texture blend on the GPU. As we fetch a waveforms samples asynchronously for each track, initial render time for the view is less important than performance during playback. Instead of masking the waveform samples, they can be drawn twice: once in the unplayed state, once in the played state with gradient applied. That way, each waveform is contained in separate views that clip their subviews. To adjust the waveform position within these windows, the bounds origin can be adjusted for each subview to slide over its content, similar to how a UIScrollView works. 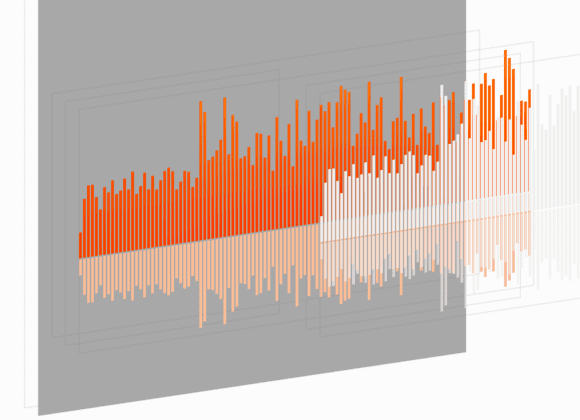 You can offset the bounds origin of the left clip view by its width. The result is a seamless view that looks exactly the same as the masking effect. Because we are only moving views around in the hierarchy, redrawing does not need to occur and the same keyframe animations can be applied to each of the clip views. After applying these changes, the GPU utilization drops to less than 20% for 60 FPS animation. This was considered fast enough, and is our final iteration of the waveform renderer.

Understanding the performance cost of drawing techniques on iOS can be tricky. The best way to achieve acceptable performance is to start simple, profile often, and iterate until you hit your target. We significantly improved performance by profiling and identifying the bottleneck at each step, and most of the drawing code from our initial naïve implementation survived to the final performant iteration.

We obtained the biggest win by shifting work from the CPU to the GPU. Any CoreGraphics drawing done using drawRect: uses the CPU to fill the layers contents. This is often unavoidable, but if the content seldom changes, the layer contents can be cached and manipulated by CoreAnimation on the GPU. After the drawing reduces to manipulating UIView properties, nearly all of the work can be performed using animations, thereby reducing the amount of CPU view state updates.

It is important to consider GPU usage, but this is harder to understand intuitively. Profiling with Instruments provides helpful insight, especially the OpenGL ES Driver template, which shows animation FPS and the percentage utilization of the GPU. The main tricks here are to reduce blending and masking, ideally using opaque layers wherever possible. The simulator option “Color Blended Layers” can be useful to identify where you have unnecessary overdraw. For more details see the Apple documentation and WWDC videos.