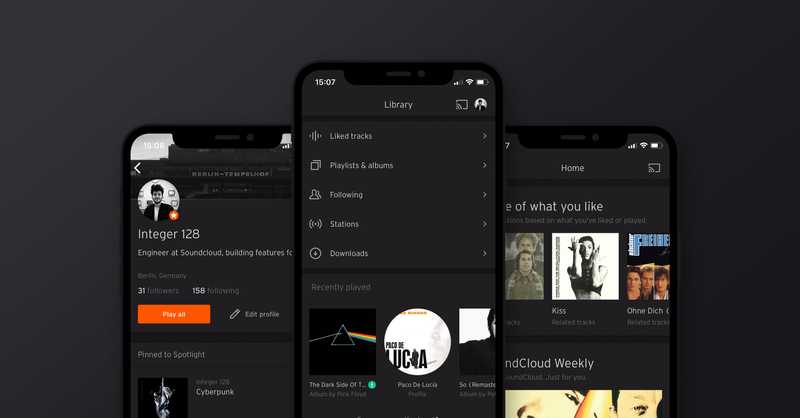 Last week’s update to the SoundCloud iOS app includes support for Dark Mode. This took several months of work and collaboration between design and engineering teams across the company, so we wanted to share our approach to implementing Dark Mode and some of the obstacles we encountered along the way.

Apple did an excellent job implementing Dark Mode in iOS 13, but because it’s important for us to support compatibility with previous versions of iOS, we decided to build our own implementation of themes. To achieve this, we built a fast, type-safe, and powerful observer pattern in Swift.

The observer pattern is a one-to-many relationship between objects, meaning that when one object changes its state, all of its dependent objects are notified and updated with the new state. Looking at this design in another way, the observer pattern can be seen as a delegation pattern with one-to-many delegates. We can think of it as the foundation of reactive programming.

The key objects in this pattern are the subject and the observers. A subject may have any number of dependent observers, and all observers are notified whenever the subject undergoes a change in state. It’s important to note that the observers do not access the state directly, because this can lead to dangerous race conditions.

How? It could be that while an observer is accessing the subject’s state, the state is changed from another thread. But the possible combinations of things that can go wrong here are exponential, so it’s a requirement that the subject informs the observers about state changes and never the other way around.

State to Be Notified

Let’s start by defining an abstract Theme as our state:

Now we can define, for example, a concrete DarkTheme:

In our case, an observer is going to be a View or a ViewController that is interested in using colors. Following the “program to an interface” philosophy, let’s first define an observer as a protocol:

Now we can implement a concrete observer — for example, in a LoginViewController:

That’s great! Now our LoginView is an observer that can be notified about Theme updates.

We want to be able to keep a reference to each observer, but without taking care of the memory management of these objects. In essence, we need to find a data structure that holds objects weakly, in order to prevent memory leaks.

In addition, we need to provide a fast and cheap way to subscribe new observers.

If you’re thinking this sounds like a Set data structure, you’re correct! We needed to build a Set that can only hold objects weakly. So after some research, we found a Foundation class called NSHashTable<ObjectType> that can reference objects weakly and add and access objects in constant time, O(1):

To make the data structure more useful, we can extend it and create a reusable generic WeakSet class:

And of course, let’s unit test it!

Now that we have a solid data structure to work with, we can define a concrete subject:

Now Let’s Bring Everything Together

Now we can add a state to our ThemeSubject. In our example, this will be Theme:

That’s awesome! Now every time we set a new state to ThemeSubject, all our observers’ views will receive the notification with the new theme. The code below shows how we can use this:

Remember that adding new views as theme observers will be in constant time, and changing the theme across our app will be linear. Quite powerful, right?

Obstacles We Encountered along the Way

While implementing themes on the iOS app, the major problem we encountered was the inconsistency of UIColor use. This is because some parts of the app set colors on Storyboards or XIB files, while in other parts, the colors were used as global variables. This led to us putting a large amount of effort into refactoring the UI layers in order to conform to the ThemeObservable protocol.

Another problem we discovered was the inconsistency and lack of UI components. For example, we found eight different implementations of the loading spinner. We thought this was a good opportunity to unify several views into common UI components.

When We Should Apply the Observer Pattern

The observer pattern is a powerful tool that we should all have in our toolset. So I’d like to share some tips on how to identify opportunities to apply it:

There are a handful of benefits that come from making use of the observer pattern. They include:

This post details how we created a dark mode for the SoundCloud iOS app using the observer pattern. But the pattern is not just limited to this kind of scenario. In fact, here are other real-world examples of where you can apply the observer pattern:

Do you have more ideas of other problems that can be solved with this pattern?