Speeding Up Builds with Dagger Reflect

A large portion of an Android app’s build time can consist of Dagger1 annotation processing,2 and most developers agree that productivity is important, so we decided to experiment to see if we could save time when compiling the SoundCloud Android app. This blog post covers how we used Dagger Reflect to save developer time with minimal changes to our codebase. Before we dive deep into how we saved Dagger annotation processing time, let’s make sure we’re on the same page in understanding what dependency injection is. 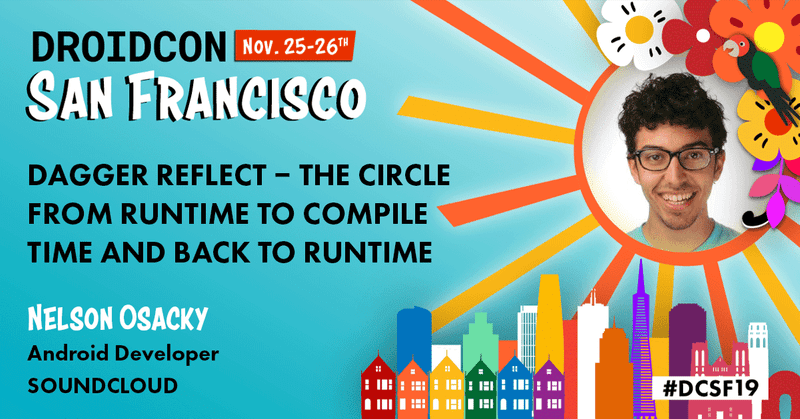 Dependency injection frameworks in the Android world started by bringing practices from the Java server side to Android. At the time, these frameworks, e.g. Guice, were reflection based, meaning they inspected the program’s code during runtime. This approach was especially slow on Android. Then Dagger came along and alleviated this problem by generating code at compile time instead of using reflection at runtime. However, the tradeoff to the faster app startup time was a longer time spent compiling, which was especially noticeable as apps grew in size. 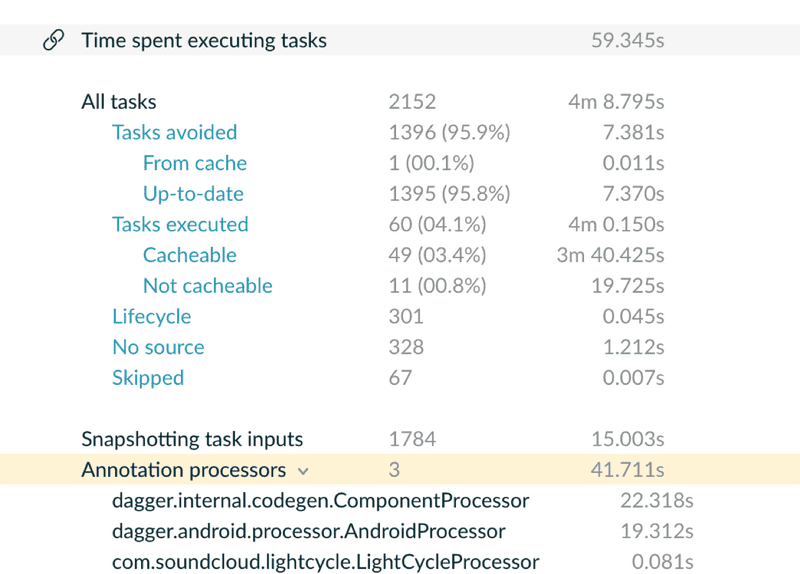 In the above example from our app, a 59-second build spent 42 seconds processing annotations. More specifically, the 42-second processing time is spent checking the code, analyzing the object graph, and generating the code. To put this in perspective, in the SoundCloud Android app, Dagger generates a very large component class with more than 10,000 lines of code.

So this is how we as developers using Dagger started to suffer. What this meant for us here at SoundCloud is that we needed to find a solution that saved time. This sparked looking into Dagger Reflect. We did this because it offered the possibility of the best app startup time for users and the best compile time for developers, with little changes to the production code. Another option would have been to migrate our entire codebase to a runtime- or reflection-based dependency injection framework. However, we decided against it because the cost of migration and the slower startup times were not worth it.

Dagger Reflect is an open source project by Jake Wharton that mimics the API of Dagger.3 However, instead of generating code at compile time, it parses injectable objects and the component dependencies at runtime. This skips generating and regenerating the same code for every build. It instead uses a dynamic proxy class, which implements an interface specified at runtime. Dagger Reflect proxies an application’s Dagger Component to the Dagger Reflect runtime.

How to Use Dagger Reflect in Your Project

The partial reflection approach requires the least amount of changes to your existing codebase, and almost no downside — it takes only 60 ms of code generation to glue your code to Dagger Reflect. Here’s how to start using Dagger Reflect in your project.

Make sure to use the Dagger Component Factory or Component Module annotations:

Ensure that all Qualifier annotations have AnnotationRetention.RUNTIME. Additionally, all MapKey annotations must have runtime retention:

Apply the Delect plugin to your root build script:

This will automatically swap Dagger for Dagger Reflect when the Gradle property dagger.reflect is set to true.

Delect is our open source Gradle plugin that makes it much easier to switch out all the regular Dagger dependencies for the Dagger Reflect versions in your project. Here is an example of the following dependency swap you would need to perform in each Gradle module:

In some initial trials, we noticed that developers’ workflows switched from the IDE to the command line while working on the same task. Only enabling Dagger Reflect for IDE builds triggered a full rebuild when switching and vice versa. Because of this painful rebuild, we chose not to enable Dagger Reflect in the Gradle Plugin only in IDE builds. Instead, Delect is enabled or disabled via a user controlled Gradle property, (dagger.reflect).

A quick way to enable Dagger Reflect when the plugin is applied is the following:

Before we dig into the numbers, we want to note that we’ve spent a lot of time optimizing our builds by using incremental annotation processors and enabling caching, and as a result, have solved as many build cache misses as we possibly could.

Though on average, local developer builds are under 60 seconds, some builds can take as long as 3-5 minutes here at SoundCloud. As an example, the following build scan shows a build that took 5 minutes and 44 seconds. 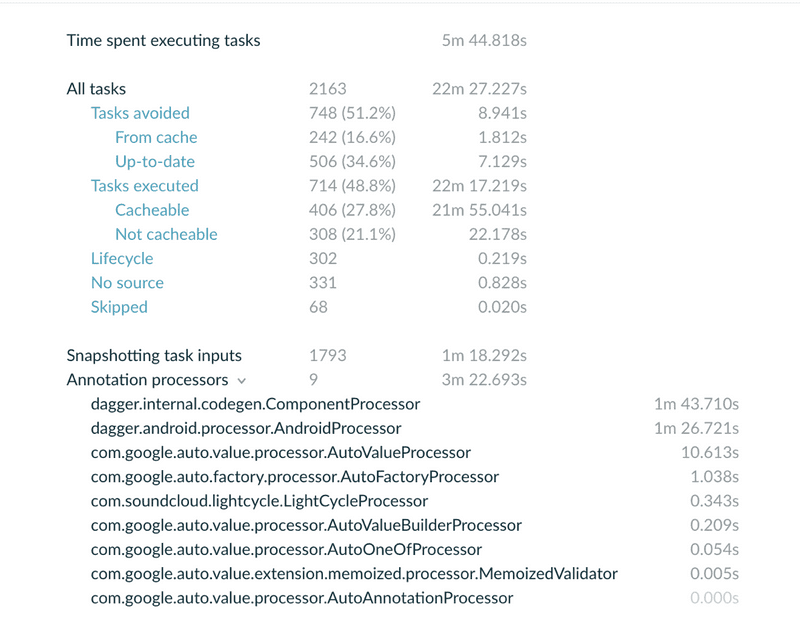 Out of all the annotation processors in use here, Dagger takes the most amount of time by far. It took a total of 3m 9s in the above example.4

Our Dagger Reflect benchmark in our Android project led to a decrease in build times from 62 seconds to 31 seconds for an ABI change to a module. Dagger Reflect makes builds take half as long!

However, we see the biggest wins on the longest builds because those are the ones that spend the most amount of time in annotation processing. For simply applying a Gradle plugin in the root of a project, this is probably the easiest build speed win!

To sum it up, we saw that Dagger was taking a large portion of our build times. We saved up to 50 percent of our local build times with little maintenance cost by swapping regular Dagger for Dagger Reflect. Try it out in your project!