Building Products at SoundCloud —Part I: Dealing with the Monolith

Most of SoundCloud’s products are written in Scala, Clojure, or JRuby. This wasn’t always the case. Like other start-ups, SoundCloud was created as a single, monolithic Ruby on Rails application running on the MRI, Ruby’s official interpreter, and backed by memcached and MySQL.

We affectionately call this system Mothership. Its architecture was a good solution for a new product used by several hundreds of thousands of artists to share their work, collaborate on tracks, and be discovered by the industry.

The Rails codebase contained both our Public API, used by thousands of third-party applications, and the user-facing web application. With the launch of the Next SoundCloud in 2012, our interface to the world became mostly the Public API —we built all of our client applications on top of the same API partners and developers used.

These days, we have about 12 hours of music and sound uploaded every minute, and hundreds of millions of people use the platform every day. SoundCloud combines the challenges of scaling both a very large social network with a media distribution powerhouse.

To scale our Rails application to this level, we developed, contributed to, and published several components and tools to help run database migrations at scale, be smarter about how Rails accesses databases, process a huge number of messages, and more. In the end we have decided to fundamentally change the way we build products, as we felt we were always patching the system and not resolving the fundamental scalability problem.

The first change was in our architecture. We decided to move towards what is now known as a microservices architecture. In this style, engineers separate domain logic into very small components. These components expose a well-defined API, and implement a Bounded Context —including its persistence layer and any other infrastructure needs.

Big-bang refactoring has bitten us in the past, so the team decided that the best approach to deal with the architecture changes would not be to split the Mothership immediately, but rather to not add anything new to it. All of our new features were built as microservices, and whenever a larger refactoring of a feature in the Mothership was required, we extract the code as part of this effort.

This started out very well, but soon enough we detected a problem. Because so much of our logic was still in the Rails monolith, pretty much all of our microservices had to talk to it somehow.

One option around this problem was to have the microservices accessing directly the Mothership database. This is a very common approach in some corporate settings, but because this database is a Public, but not Published Interface, it usually leads to many problems when we need to change the structure of shared tables.

Instead, we went for the only Published Interface we had, which was the Public API. Our internal microservices would behave exactly like the applications developed by third-party organizations integrate with the SoundCloud platform. 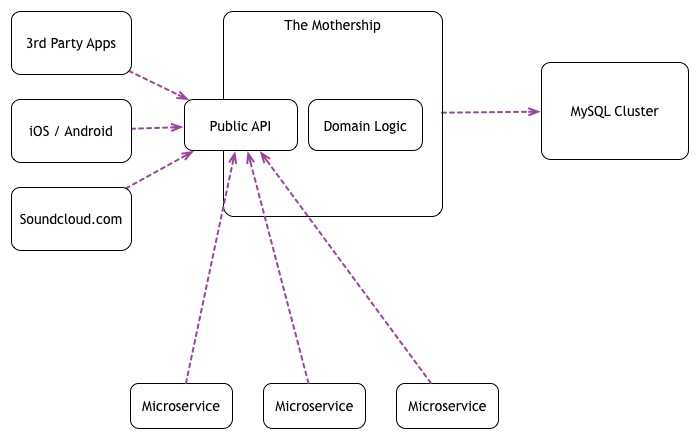 Soon enough, we realized that there was a big problem with this model; as our microservices needed to react to user activity. The push-notifications system, for example, needed to know whenever a track had received a new comment so that it could inform the artist about it. At our scale, polling was not an option. We needed to create a better model.

We were already using AMQP in general and RabbitMQ in specific — In a Rails application you often need a way to dispatch slow jobs to a worker process to avoid hogging the concurrency-weak Ruby interpreter. Sebastian Ohm and Tomás Senart presented the details of how we use AMQP, but over several iterations we developed a model called Semantic Events, where changes in the domain objects result in a message being dispatched to a broker and consumed by whichever microservice finds the message interesting. 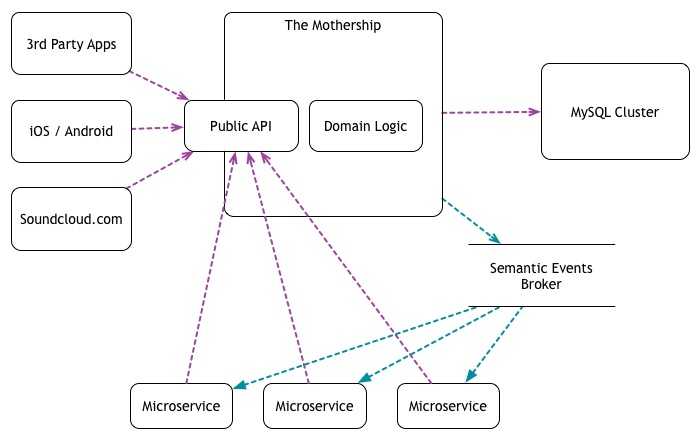 This architecture enabled Event Sourcing, which is how many of our microservices deal with shared data, but it did not remove the need to query the Public API —for example, you might need all fans of an artist and their email addresses to notify them about a new track.

While most of the data was available through the Public API, we were constrained by the same rules we enforced on third-party applications. It was not possible, for example, for a microservice to notify users about activity on private tracks as users could only access public information.

We explored several possible solutions to the problem. One of the most popular alternatives was to extract all of the ActiveRecord models from the Mothership into a Ruby gem, effectively making the Rails model classes a Published Interface and a shared component. There were several important issues with this approach, including the overhead of versioning the component across so many microservices, and that it became clear that microservices would be implemented in languages other than Ruby. Therefore, we had to think about a different solution.

In the end, the team decided to use Rails’ features of engines (or plugins, depending on the framework’s version) to create an Internal API that is available only within our private network. To control what could be accessed internally, we used Oauth 2.0 when an application is acting on behalf of a user, with different authorisation scopes depending on which microservice needs the data. 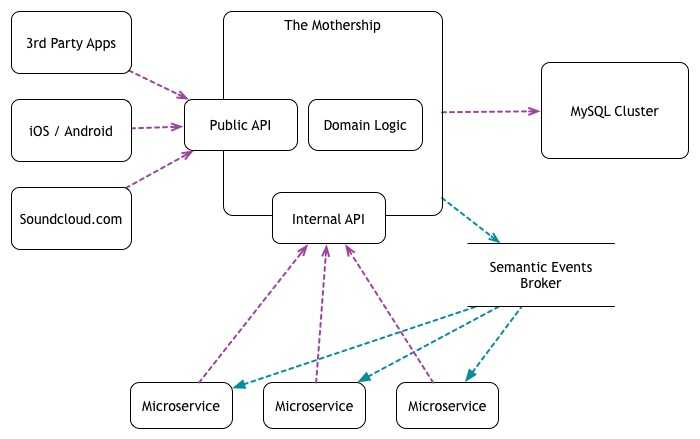 Although we are constantly removing features from the Mothership, having both a push and pull interface to the old system makes sure that we do not couple our new microservices to the old architecture. The microservice architecture has proven itself crucial to developing production-ready features with much shorter feedback cycles. External-facing examples are the visual sounds, and the new stats system.