Apple introduced automated UI testing in Xcode 7. This was a great addition for developers because this native support promised, among other things, an improvement in the flakiness notoriously associated with automation tests. As many of us developers have experienced, tests can sometimes fail even when there has been no modification to the test or underlying feature code.

Flakiness can often come from external factors. One such source of flakiness is live data, e.g. data loaded from a web service API. Data from the web service often drives the state of the UI. A test might assume the UI is in a certain state, e.g. the like button shows as “liked” or that a playlist has 10 songs. But when the data from the web service changes, the test fails.

Such occurrences are relatively common, and there are many other scenarios, such as network connectivity issues, in which these false negatives can occur. In these situations, the functionality of the app is not broken; it’s just that our assumptions about the data are no longer valid. What’s more, debugging the cause of these failures can be a time-consuming affair.

In this blog post, I’ll discuss how we at SoundCloud implemented a simple system for automatically recording and replaying the network responses that occur during the course of an Xcode UI automation test in order to remove any flakiness that may be introduced from the existence of live data coming from a web service.

It should be noted that third-party options such as DVR provide similar functionality. However, given that automatic stubbing of network requests can be achieved with a handful of classes and extensions, this post aims to showcase a lightweight approach that doesn’t require adding yet another dependency to your project.

An example project showcasing the approach taken can be found here. Open ArtistsFeature.swift for instructions.

The first step is to create an AutomationTestURLSession object that is capable of stubbing the app’s network responses with the contents of a JSON file, since this is the data format we expect from our web service.

The next step is to inject this session whenever tests are running.

Finally, we will implement a system for automatically recording and replaying network responses in order to create an easy-to-use API. 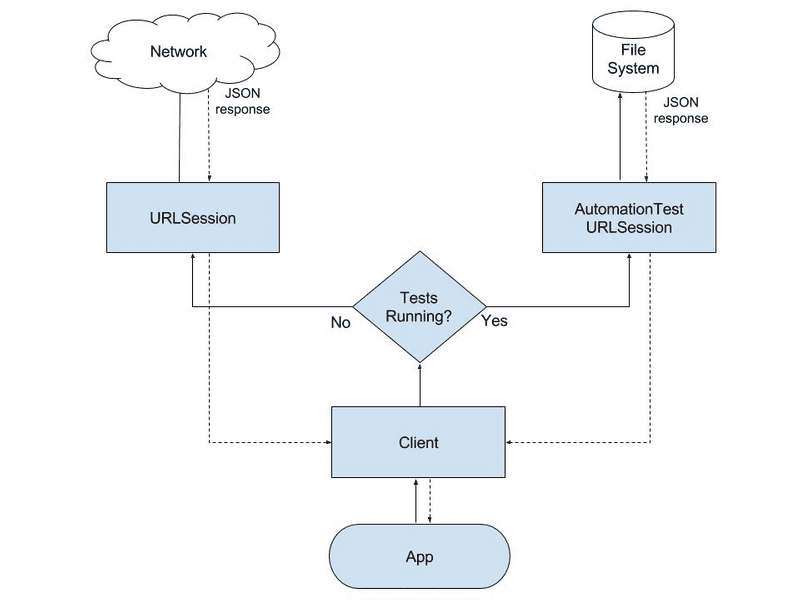 The figure above shows how an AutomationTestURLSession is injected into the app in order to stub network responses using JSON files.

Let’s say we have a Client object our app uses to make all network requests. A simplified version might look like this:

With these protocols in place, we can easily make URLSession and URLSessionDataTask conform to it:

Now that we have URLSession and URLSessionDataTask conforming to our protocols, we can depend on the protocols from the Client instead of the concrete object types:

Now we can create our AutomationTestsURLSession to stub network responses with the contents of JSON files by making it conform to the same URLSessionManaging protocol:

The resume method of our AutomationTestsDataTask is where the stubbing actually occurs.

In order to explain the first line of the resume method, it’s useful to know that Xcode automation tests run to the app in a separate process, which limits the ways in which the app and the tests can share data. One common way to pass data between the tests and the app is by using the launchEnvironment property on XCUIApplication. This is basically a dictionary of type [String: String]. Keys and values you set in tests will be available to the app at runtime via the environment property of ProcessInfo.processInfo.

Here we check to see if there is some JSON in ProcessInfo’s environment dictionary for the data task’s request, as identified by its URL. If we have some JSON for a given request, then we convert it to data and call completion immediately. This results in the stubbed data being returned to our application instead of the live data from the API that would usually be returned!

Now all we need is a way of detecting that automation tests are running so that we can swap out the session object the Client uses.

At SoundCloud, we create a separate app delegate object to use when running automation tests, e.g. AutomationTestsApplicationDelegate. This can be a good place to set up application state that your tests rely on and/or clean up that state between test runs.

We can hook into this system to detect whether or not tests are running. First we need to set an environment variable whenever tests are running. We can use XCUIApplication’s launchEnvironment property to set a flag. Say we’re writing a test for a sign-in flow in our app. We could alter the implementation of setUp, like so:

The main thing we do here is use the isAutomationTestsRunning flag in order to decide which app delegate object to use.

We can use this to create a simple helper method on UIApplication to tell if tests are running:

Then all we need to do is create the correct session depending upon whether or not tests are running and use it wherever we usually create the client:

With this, we already have the core of what we need to stub requests in our tests. However, using it as is would place a certain burden on developers; in order to stub requests, they first need to know what requests are made during a test, something which could potentially be a lot. Then they would need to manually make the requests, e.g. in Postman; save the responses to a file; and manually specify which stub should replace which request. The implementation currently lacks the API that would enable this final requirement, but since I’ve promised you automatic recording/replay functionality, I’ll skip straight to the good stuff!

What we’re aiming for is a simple API that takes the burden off developers and enables them to do network stubbing quickly. Our goal is to be able to call one API for recording, run our test, and if it succeeds, then switch to another API for replaying the recorded stubs — something like the record/replay functionality that is built into Xcode automation tests themselves.

To achieve this, we rely on an important mapping throughout: URLRequest -> Stubbed Response. We will basically use the URLRequest to construct a path on disk to the stubbed response. We can then use this path to save responses to disk as JSON files when we’re in “record mode” and load them back when we’re in “replay mode.”

The gif above shows stubs being recorded for the test_singIn test.

Before we get started with the automation and application side setup, it’s worth spending a little time on the part that binds the two together. We will need to pass data between the two processes, and because the environment and launchEnvironment dictionaries of ProcessInfo and XCUIApplication, respectively, are just “stringly typed,” we can add some syntactic sugar on top to make the whole thing a bit more type-safe:

Here we basically define an EnvironmentKey enum that allows us to wrap the environment and launchEnvironment dictionaries of ProcessInfo and XCUIApplication in order to be able to pass data between the app and tests in a type-safe way. Along the way, we’ll discover what the various environment keys are used for, but most should be fairly self-explanatory.

We need to pass the name of the running test through to the app so that our AutomationTestsURLSession can construct the directory in which to record/replay stubs. We can benefit from the fact that each test in a given test case is essentially a new instance of the test case. This is how XCTest helps ensure that individual tests don’t interfere with each other. In fact, for an example test case called, say, SignInFeature, if you print self.description during a test, you will see something similar to the following:

The output above reflects the test case name (SignInFeature) and the actual running test (test_signIn). This is perfect for our needs because it provides us with an easy way to associate a test name with the requests that are made during the test:

We implement startRecordingStubs as an extension on XCUIApplication, passing self so that we can use self.description to get a name for the test. Although relying on the output from self.description may seem brittle, its convenience was too good for this developer to ignore:

The code above basically sets test_signIn into “record mode” so that the app knows to start recording network requests during its execution. We’ll later use stubbedTestName and networkStubsDir EnvironmentKey cases from the app to construct the path to the stubs on disk. The .networkStubsDir key will point to the root directory where all stubs are stored. The .stubbedTestName key will point to the name of the currently running test, used to create the path to the directory for all stubbed requests for this test.

For the implementation of networkStubsDirURL, we take advantage of the default #file argument passed into every method, which gives the absolute path to the current file on disk. Using this, we can construct a new path for where we will record our network stubs, relative to some directory that we know will always be there, like AutomationTests/ in the example below:

In order to record the network responses in the app when the tests are running, we need to add a bit of functionality to our AutomationTestsURLSession:

The logic of dataTaskFromRequest(_:completionHandler:) should be easy enough to read:

We’ve added three new private properties. The first is an instance of our Environment class. It has a new property, isRecordingStubs, which informs the AutomationTestsURLSession of whether or not it should record the responses from the network. This is based on the call we made back in setUp of our test case, i.e. app.startRecordingStubs(for: self):

The second property, _session, is an internal URLSession property. We use this when we want the network response to complete as normal, i.e. in points 1 and 3 above.

The main method we’re interested in here is recordResult(of:with:), which our AutomationTestsURLSession calls whenever “record mode” is enabled. It uses a local function which wraps the passed completion block. This is the completion block that will return network responses to the application. We actually return this wrapped function and pass it as the completion parameter of the internal URLSession’s URLSessionDataTask that our AutomationTestsURLSession holds so that when the data task’s completion block gets called, our recordResult(of:with:) method runs first, thereby writing the results to disk. This method then internally calls the URLSessionDataTask’s completion block so that the data can also be returned to the app as normal. The implementations of createTestCaseDirIfRequired and makeTestStubPath are omitted for brevity.

One thing not explained so far is the AutomationTestsURLSession’s shouldStub method. This makes use of a NetworkResponseStubStorage object, which is a simple object that makes use of the Environment object and FileManager in order to construct the file paths to the stubbed responses on disk. If shouldStub returns true, we return an instance of our AutomationTestsDataTask, which actually does the stubbing:

We can take advantage of the NetworkResponseStubStorage object just introduced to update the resume method of AutomationTestsDataTask:

You might notice that, for the sake of brevity, we are hardcoding the statusCode parameter of the response object. If your app explicitly handles these status codes, you may need to extend the solution to also record/replay the status code for a given request.

So there we have it. With a relatively small amount of code, we’ve been able to design a powerful feature that should go some way to alleviating flakiness in automated tests in a way that is easy to use and saves development time.

In this post, we first demonstrated how it’s possible to stub the responses to network requests made during an automation test in order to improve the stability of our tests with just a small amount of code. We then showed how the recording and replaying of these stubs can be automated using a simple API in order to remove the burden from the developer and enable this stubbing to be done quickly.