The SoundCloud Android app recently got a significant makeover: a “new year, new me” type of thing. Our remarkable design team and outstanding engineers worked together to revamp the way we display all kinds of images in the app, and I’m about to take you behind the scenes on this “glow-up” journey.

A Peek at the UI

First, here’s a look at the user interface (UI).

We went from the old design: 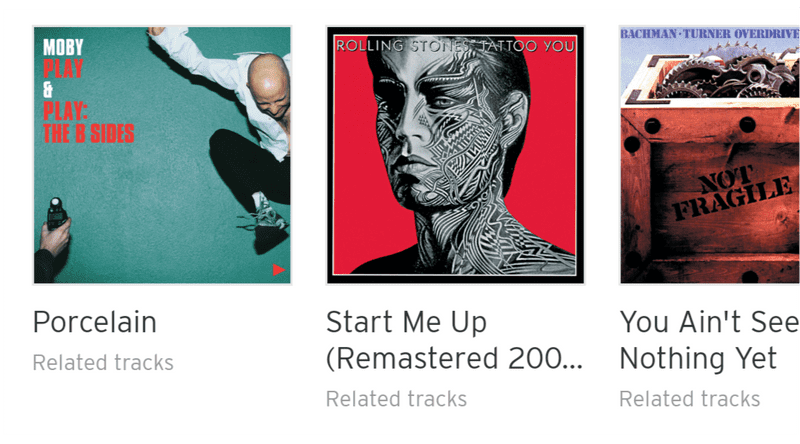 To the new design: 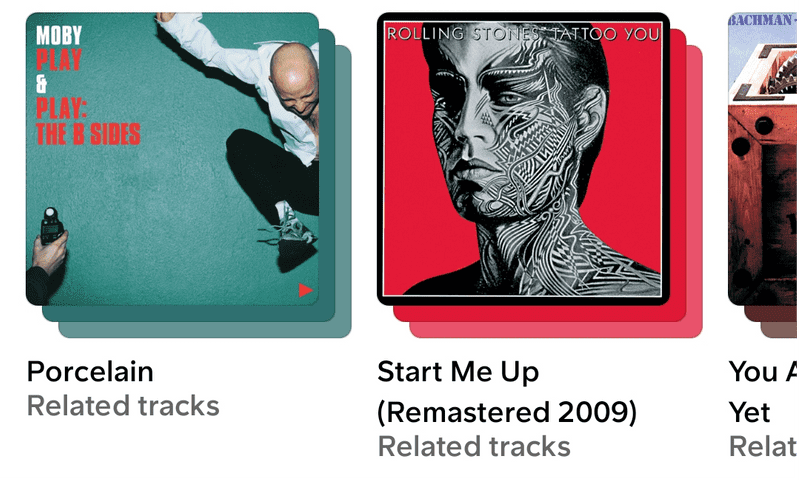 Below are some images you’ll come across while using the redesigned SoundCloud app.

This is a basic single image for tracks. 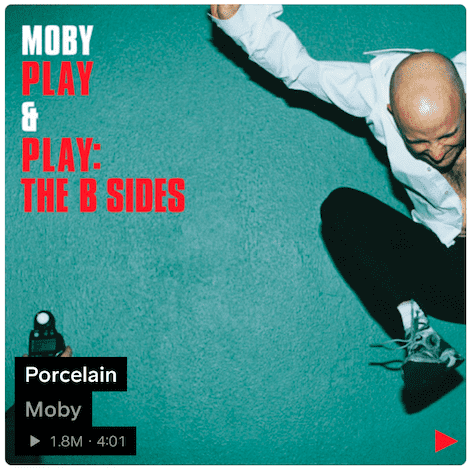 This image is for a playlist. It has a background stack with colors picked from the playlist artwork. 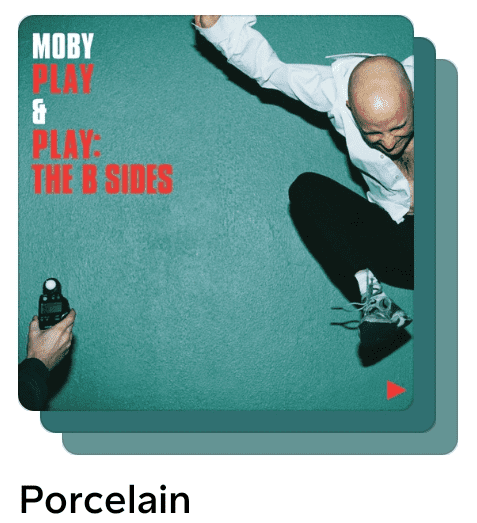 This image is for special playlists. It includes additional indicators, a blurred image stack, and a circular artist image. 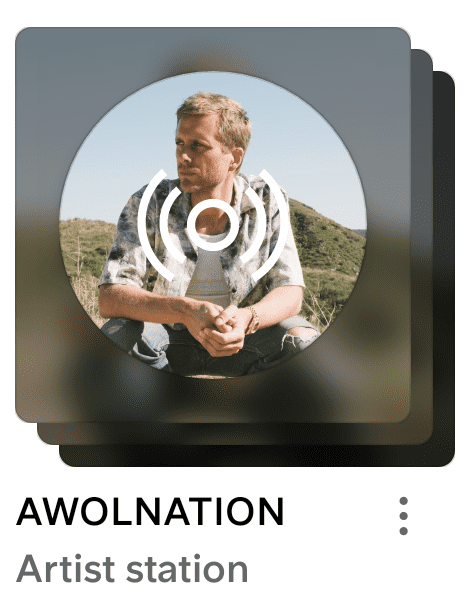 These images look great, but as you might guess, they’re all backed by code, and the implementation wasn’t exactly straightforward.

From Design to Code Implementation

Want to know how we did it? This section will cover how we went from the design ideas to implementing them in code.

First off, all images now have rounded corners. This is thanks to ShapeableImageView, which supports rounded images.

Playlists show the main artwork and two images behind the main artwork, and each image has rounded corners. We accomplished this by creating an XML file containing a ConstraintLayout with three children of ShapeableImageView:

We have some special types of playlists that can have additional overlays/blur or more images on top of the main artwork. For special playlists (see the Special Playlist section), we added another ShapeableImageView as an overlay to the ConstraintLayout with visibility="gone". If a playlist is “special,” the ShapeableImageViews visibility is changed to visible:

For playlists, the primary colors of the main artwork determine the image stack colors. We used the [Android palette library][] to make this happen. It has a simple API that picks the primary colors from images, which we can use as background colors for the stack.

Additionally, images fade in when loaded. We use the PicassoDrawable, which crossfades the newly loaded bitmap with whatever image was previously loaded. To highlight the fade-in animation, the duration of the animation was set to 200 milliseconds.

Placeholders are displayed while the actual images are downloading, and com.squareup.picasso.Target provides a callback function:

onPrepareLoad enables us to add a gray color to the stacks and a default image while waiting for the main artwork to load.

We use Picasso to load images. Picasso also offers a simple API, picasso.load(url).into(target), to download and cache images.

The image cache is used throughout the whole app so that an image in the cache will never download twice. Picasso can download or load an image from the local disk (cache).

Picasso is extendable for custom image loading operations. For example, if image loading fails, we want to display an error image. There are a few different ways to do that with Picasso. At SoundCloud, we have a custom ImageView that implements Picasso.Target.

Every time we load an image into the ImageView, we animate (fade in) the new image bitmap:

After implementing the redesign, the images looked fantastic, the design team approved, and the product managers were happy. But it came with a catch: Images were loading slower than before. The slow performance was visible while scrolling, and images flickered when moving between screens. The redesign had impacted image performance.

The following section will cover how we fixed the image loading performance.

We started debugging and discovered not a single culprit, but rather a bunch of issues that were contributing to the performance problem. We also investigated the app’s GPU overdrawing, which I’ll elaborate on later. The next sections outline the specific issues we encountered and how we fixed them.

To generate the image stack colors, we use the Android palette library. To save time on regenerating the palette, we used LruCache<Bitmap, Palette> to store the bitmap and palette key-value pair for faster on-demand loading.

So every time we loaded an image, the code below executed:

Using a Bitmap as a key, we retrieved the palette from LruCache. However, using bitmaps as keys to the cache caused a performance issue. Given that bitmaps are large objects, it’s best to never use them as keys to a Cache, Map, or any other data structure. This is because comparing bitmaps is time-consuming.

The fix ended up being simple. We switched from LruCache<Bitmap, Palette> to LruCache<String, Palette>. The String is the URL of the loaded bitmap, and comparing strings is quick and consumes less memory.

The code is below:

To generate the palette colors from bitmaps, we used the code below:

The code is simple: It provides the bitmap and generates the primary colors for that bitmap. But palette generation takes time. It works by checking each pixel in a bitmap to find the most used colors. For example, if an image contains a lot of red, then the palette will contain the red color.

The bitmaps we use to generate the palette have a size of 500×500, which is large and slows the palette generation.

The palette has a function, resizeBitmapArea(size), that scales the bitmap down, so we went from 500×500 to 15×15. We also use maximumColorCount(colors) to find fewer colors, as in our implementation, we only needed the dominant color. By default, the palette finds 16 different colors.

The code below generates palettes faster, but the tradeoff is primary color accuracy, which is ultimately fine; shades of red are still red:

Issue #3 — Animating from the Placeholder to the Real Image

To address this, we dropped animations for cached images. Luckily, Picasso offers the from enum, Picasso.LoadedFrom, together with the loaded bitmap. Picasso.LoadedFrom tells us where the bitmap was loaded from:

If the image was loaded from NETWORK, we animate the new image; otherwise, we display the image without an animation:

Another minor tweak was that we made the fade-in animation faster — from 200 ms to 60 ms. 200 ms felt like we were showing off our fancy animations rather than benefitting the user by displaying the image quickly.

Many screens in the SoundCloud app consist of lists of tracks or playlists, which means the user will scroll through the list to play a track. While the user scrolls, the new images are loaded and cached. Downloading new images takes time, so we thought it’d make sense to download and cache a few of the upcoming images in a list before the images of tracks/playlists are even displayed on the screen.

We preloaded the three subsequent images in RecyclerViews. If you use Glide, you’ll know it supports preloading images out of the box.

Since we use Picasso for image loading, we implemented image preloading based on Glide’s example.

When preloading items, we needed to consider the following:

Below is the ItemPreLoader class, which handles all the points mentioned above:

Finally, here’s the code to find the last visible item in the RecyclerView:

GPU overdrawing is when an app draws the same pixel more than once within the same frame. As a result, GPU overdraw visualization shows where an app might be doing more rendering work than necessary.

We caused a high overdraw severity because we were rendering/drawing three ImageViews on top of each other in the stacked ImageViews when displaying playlists. This is something we shouldn’t do. 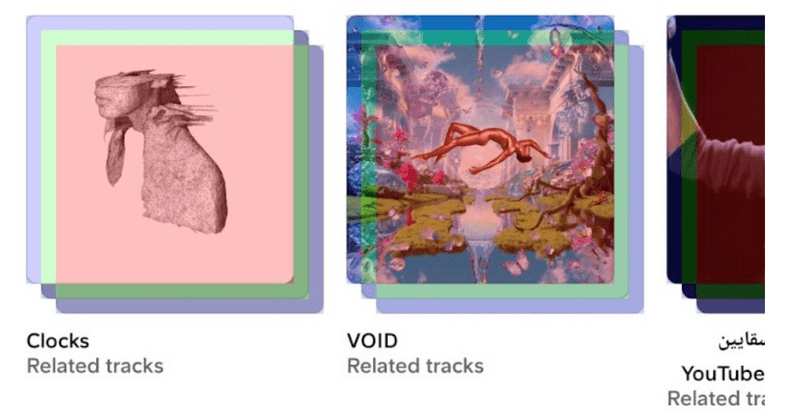 We draw three full images on top of each other, even though only 10 percent of the stacked images are visible. With stacks, 90 percent of an image isn’t visible, but it’s still drawn, which affects the frame rate.

To fix overdrawing, we would’ve needed to add a lot of custom complex drawing logic, which would take time to build, debug, and maintain. So the tradeoff here was unlikely to be worth the upfront effort and maintenance difficulties.

We did build the custom drawing logic, but it was too complex to maintain, and there was no performance benefit.

The main ideas were:

The code below draws three bitmaps on a custom view. Only the bitmaps’ visible areas are drawn, so as to avoid GPU overdrawing. Since only a subset (10 percent) of the bitmaps is drawn, drawing is now faster:

The code above calculates the bounds (area) of each bitmap. The bounds are the area into which the bitmap will be drawn. The visibleBitmapOffset defines how many pixels the bounds will be moved/offset.

To draw only the visible bitmap areas and avoid overdrawing, we use paint.xfermode = PorterDuffXfermode(PorterDuff.Mode.DST_ATOP).

PorterDuff.Mode.DST_ATOP draws only the outside area of the following image. So if there is already something drawn in the view, then DST_ATOP only draws the outer part of what we’re drawing now. Since we already drew the top bitmap, only the middle bitmap’s outer part is drawn. It’s the same with the bottom bitmap; only the outer section is drawn.

The section above outlines the basics of how to draw three images without overdrawing. Complications arise when the images have round corners; the stacks can be solid colors; and there can be more images on top of the stack, fading in each stack of bitmaps and drawing rounded borders. Implementing all of that led to a great deal of drawing code, which was hard to maintain. Thus, it wasn’t included in the project.

If you want to learn more about computer graphics drawing, Fundamentals of Computer Graphics is a great book.

Redesigning an entire app takes a lot of time — from product managers coming up with the product specifications, whiteboarding sessions, and creating wireframes, to UI and UX designers drawing the final design. Finally, the engineers have to implement the new design and rewrite UI components, and usually, all this work is done under pressure with a set deadline.

We all like to go fast and get a redesign done, but as a result, we end up rushing and forgetting the important stuff like properly testing the new UI to see if it works, and checking to ensure the performance and frame rate are acceptable. Testing and measuring performance is the responsibility of the engineers, so it’s of the utmost importance to always test and measure the performance of your new UI.

With proper performance measuring and testing, we were able to identify and fix image UI issues we encountered. And although it took longer, SoundCloud ended up with a more polished product.