One challenge engineering teams often face is dealing with work that doesn’t revolve around developing new features but that still requires the team’s attention and time. The Content Engineering Team here at SoundCloud is no exception, so we iterated on a process to deal with unplanned and support tasks to end up with fewer interruptions and more time to spend on implementing planned features.

We define unplanned and support tasks in the following way:

There are several reasons why it is important that we come up with an approach to dealing with unplanned and support tasks. For one, these tasks take up time we would normally spend on delivering features, so naturally we want to minimize the number of them. Secondly, we want to make this kind of work visible; it is often invisible outside of the team, which can give the impression the team is slow and dysfunctional. Finally, these unexpected and often urgent tasks cause extra stress and context switching for the team — in addition to the fact that support tasks are often not very interesting, due to their manual and repetitive nature.

Initially, my team had a very open way of dealing with requests from stakeholders that resulted in unplanned and support tasks: People who had requests could leave them in our Slack channel, and a team member in a single point of contact (SPOC) role was supposed to address them.

Some team members liked taking on this role because they liked helping out our stakeholders. Others didn’t like it as much because they didn’t want to be interrupted, and as a result, were slower in responding to requests.

And even though this idea resulted in a designated person responsible for addressing incoming requests at any given time, all the other team members still saw them. As a result, they were often distracted, and some people started discussing the requests even when they were not urgent. It got to the point where the distractions and unclear priority of the requests began popping up as a recurring topic in our team retrospectives.

This led us to try another approach. We got rid of the SPOC role and instead tried asking stakeholders to reach out using our team Slack channel or via direct messages, but only for urgent requests. We defined an urgent request as something that impacts our users, disrupts a key feature, or blocks employees from doing their work. For all other requests, we specified an email address that reached the team Engineering Manager (EM) and Product Manager (PM).

We had no difficulties convincing stakeholders to try this approach, and as a result, the number of requests in Slack dropped almost immediately.

This is the support request process we still use today.

We have two-week iterations in our team, and if a non-urgent support request comes up, we add it to the next iteration. The next iteration rule is important because we want to avoid building up a backlog of issues that never get worked on.

Initially, we went over the support task tickets during our planning session so that everyone was aware of them. Then we let the team self-organize with the goal of finishing the tasks by the end of the iteration. This resulted in a situation where it was often the same team members tackling the support tickets while other team members focused on feature work the entire length of the iteration. However, this wasn’t necessarily fair, so after the issue came up in one-on-one meetings and retrospectives, we addressed it and found a new solution.

Our new way of handling these tasks was to assign support tickets to team members in a round-robin fashion, thereby ensuring everyone got a fair share of support tickets. This not only improved team morale, but it made it so that the work was divided more equally and fairly, which also resulted in increased knowledge sharing.

Another variant we started trying out recently is having one day in the iteration when the team works together to finish the support tickets. This has the additional advantage that more pairing takes place, which is better for knowledge sharing. It is also nice that everyone shares the work together at the same time as a team effort.

As part of the overall process, we also think it’s important to track the work done on these tasks. We do this by creating a JIRA issue for every request that comes in, even when the request can be answered by the Engineering Manager or Product Manager. Once an issue is created, we also share it with the stakeholder who initiated the work so they can follow up on the progress.

Keeping track of the work in this way allows us to measure it, learn from it, and act on it.

More specifically, about once every two months, we query all the finished unplanned and support issues of the past iterations in JIRA. We then group them in categories and add up the time spent on them. An example of this from earlier this year is shown below. 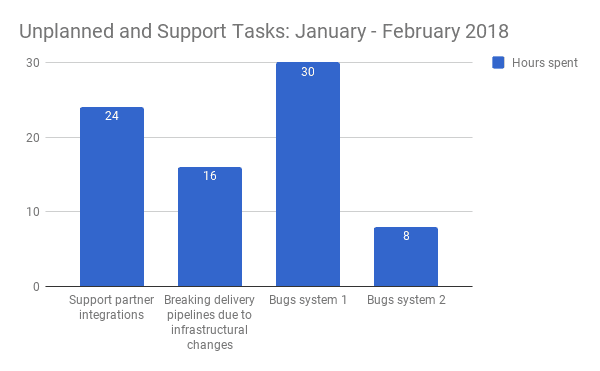 Measuring, learning, and coming up with action points is important, because having tangible numbers about the time spent on unplanned and support work makes it easier to prioritize work for fixing structural issues. This is good for both the team and for SoundCloud, as engineers are interrupted less and can spend more time on impactful work.

If you are interested in learning more about our processes, you should also read the blog post Deliver Software Faster by Managing Work in Progress, Not by Adding Overtime.